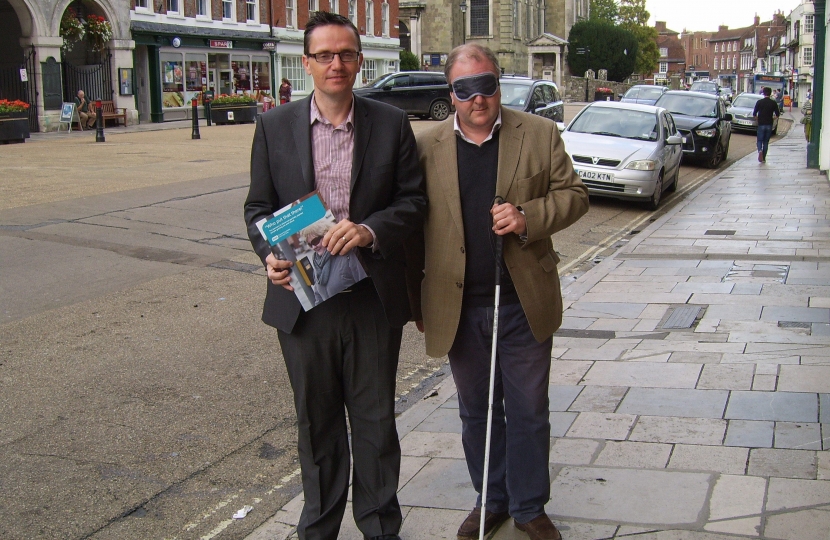 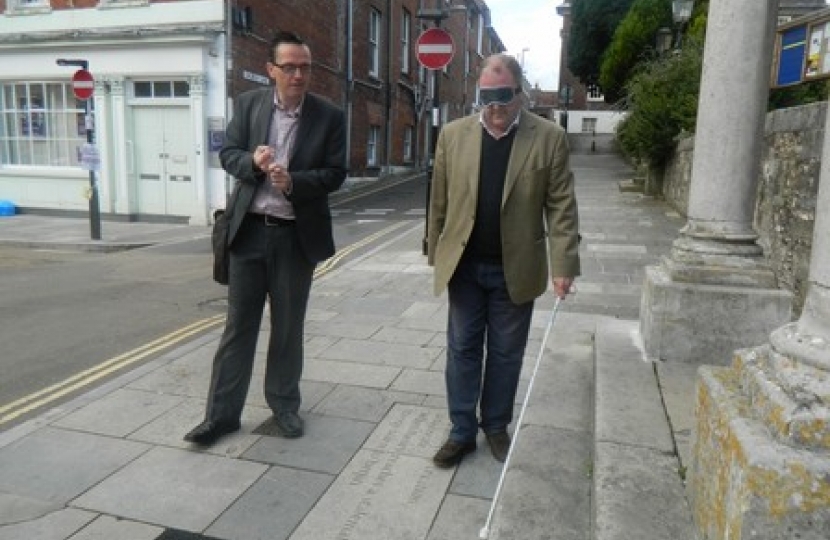 On Friday 18th September, Simon Hoare, who is championing a private member's bill to restrict cars parking on pavements, was given some first-hand experience of the issues facing blind and partially sighted people in Blandford.

Simon was invited by Mike Bell, Regional Campaign Officer for the Royal National Institute of the Blind, to participate in a Blindfold Walk to raise awareness of the problems facing blind and partially-sighted people when walking around town.

After being blindfolded and given brief instruction on the use of a white cane, Simon set off for a short walk around Market Place.  He was accompanied by Mike Bell who explained the obstructions and distractions that they encountered, from A-boards, rubbish bags put out for collection, bins, and the problems of parked cars and wing mirrors overhanging the pavement.

The short walk around the Market Place from the Corn Exchange to the Parish Pump took over 15 minutes.  Mr Bell commented that Mr Hoare had been very cautious. He said, "Other people who took up the challenge to complete a blindfold walk could only manage a few minutes, but I am impressed that Simon stayed blindfolded for almost 25 minutes."

Mr Hoare admitted, "It was quite scary, and totally disorientating, and a street I know well suddenly became an alien landscape. I urge businesses to consider not just the able-bodied but also the blind and partially sighted when they are putting out rubbish and A-boards, and drivers to be conscious of their needs when parking and driving. We want to make our town centres accessible to all."

He went on to say that the Pavement Parking Bill, number ten in the Private Members' Ballot in the House, is supported by Guide Dogs for the Blind and RNIB, and aims to give local authorities the power to enforce a ban on pavement parking in designated areas.

"It will give the blind and visually impaired, other disabled and people with pushchairs and buggies, more certainty on the route they can take if they know that on certain roads they are not going to encounter parked cars obstructing their progress."