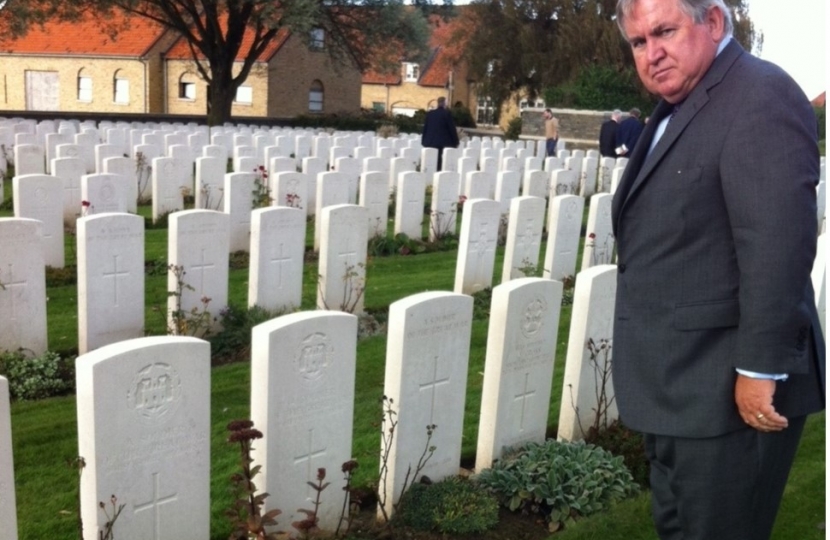 Bob was honoured to take part in a memorial visit to Flanders yesterday to commemorate the sacrifices of British and Irish soldiers in the First World War, marking 100 years since it began.

During the day he visited a series of memorials, beginning with the grave of Major Willie Redmond MP (1861-1917), who served for 34 years in the House of Commons. At the Messines Ridge British Cemetery Bob visited the graves of several unknown soldiers of the Dorsetshire Regiment.

This was followed by a visit to Tyne Cot Cemetery and a wreath laying by members of the House of Commons and House of lords, where Bob also met with North Dorset constituents, Kevin and Pat Oakley, from Milton Abbas. Tyne Cot Cemetery is the largest Commonwealth War Graves cemetery in the world and an important reminder of the 1917 Battle of Passchendaele.

The day ended with a further wreath laying ceremony and Last Salute at the Commonwealth War Graves Commission’s Menin Gate Memorial to the Missing, which records the names of the British and Commonwealth Soldiers who were killed in the Ypres Salient and whose graves are also unknown. The intensity and violence of the shelling, combined with the continuous duration of the fighting in the Ypres Salient through the First World War meant that some 90,000 of the bodies of the 300,00 soldiers killed on the battlefield were never found.

“I was honoured to have the opportunity to undertake this visit to Belgium as we commemorate 100 years since the start of the Great War. The sound of the Last Post buglers and the words of the Exhortation are always moving, but particularly so when standing on the battlefields of Ypres Salient.

The next four years will see a series of important events that will allow us all to reflect upon the sacrifices made by the 900,000 British service personnel who lost their lives in this terrible conflict and I very much look forward to paying my respects at local memorials in my own North Dorset constituency during this period of collective remembrance.”